First-ever three-time ‘Skills’ champion of Denmark is a tiler 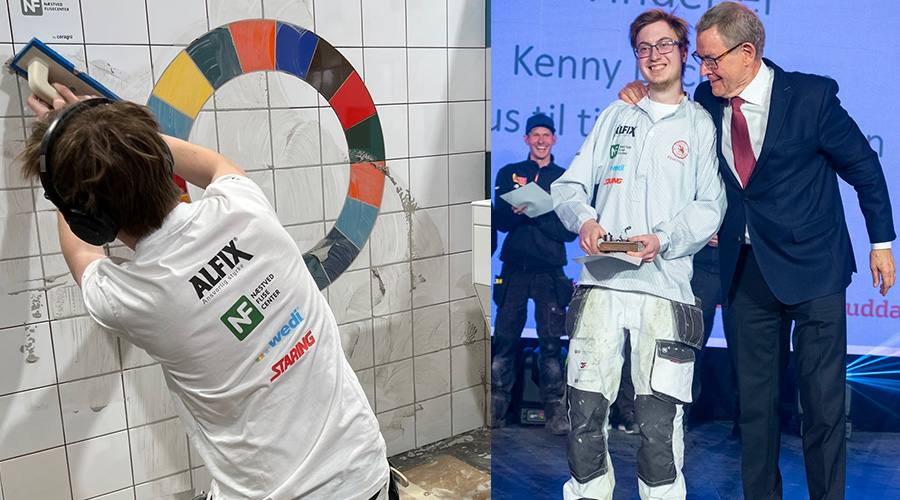 A three-time Denmark champion has been crowned for the first time in Skills Denmark’s history - tiler Kenny Bech Bruun - who now becomes the bearer of the impressive title. “A strong candidate in an incredibly strong field,” were the words of national trainer Lars Schmidt, in reference to the competition. What did the newly crowned Danish champion have to say for himself though?

Speaking in his Jutland accent about winning three times, 22-year-old Kenny Bech Bruun had the following to say: “It’s not a big deal.

Even though I’ve won three times, in my mind it was never about winning. I always think that things can be improved and am never totally satisfied”, Kenny Bech Bruun says, reflecting on his achievements. He sets high standards for himself and the quality that he delivers. Although, like many masons, he does piecework day to day, his stance on working in this way is clear: it should not mean poorer quality. “It is better to do it right the first time,” he says.

After all, the reason Kenny Bech Bruun is critical of himself is it helps with his own self-improvement. This is also something that he benefits from by taking part in Skills. “You always learn a lot by taking part in the competitions, and being more critical of yourself makes you improve,” he continues.

It is good craftsmanship, rather than winning, that drives him. “For me, Skills is first and foremost about getting a good result and having a good time with my competitors. We know each other well and work together well during Skills. It can all boil down to one single millimetre and above all whoever crafts the best piece of work on those days,” Kenny modestly states; who gained his ‘svendebrev’ journeyman’s qualification in September 2021 and now works at Axel Poulsen in Vejen day to day – usually on the bathrooms and stairwells for new builds.

A big fan of Alfix ProFix tile adhesive
Kenny Bech Bruun uses Alfix products in his work, both in competitions and his everyday work. But what’s his favourite product, we must ask? “I really like Alfix ProFix; it’s the one I’ve been using the longest. I use Alfix ProFix for everything – both floors and walls,” Kenny tells us.

International competition coming up
Next stop for Kenny Bech Bruun is the unofficial European Championships for tilers, which he is currently in training for, alongside this year’s second-placer, Kristian Bak Hansen. They will both head to Ausburg in Germany in July for the competition.

Kenny Bech Bruun had also qualified for the World Championships, which were due to be held in Shanghai in October 2022, but which unfortunately have been cancelled due to the Covid-19 situation in China. The advertisers behind the championships are considering alternative locations, with their decision set to be announced by the end of June.

As the proud main sponsor of the tiling profession at Skills, we here at Alfix would like to say a big congratulations and good luck with the competition going forward!

Here you can subscribe our newsletter, issued 4 times a year.